Our first confirmed speaker this year was Evin O’Riordain. Monki Gras has featured his beers before, but we’ve never persuaded him to speak though I have asked him a few times – he’s not exactly a marketing kind of person. This year however he volunteered to talk, which is a huge privilege. I think he appreciates what we’re trying to do. It’s a rare opportunity to see him speak.

I really love the Kernel philosophy, which is almost austere in its dedication to good taste.

This interview in the Manufacturer does a good job of capturing some of that way of thinking. He picks his customers, rather than the other way around.

British Guild of Beer Writers ‘Brewer of the Year’ 2011, vaunted across social media, wanted across both the continent and the Pacific, Kernel could easily export far greater volumes than they currently do.

However this would remove the quality control at the heart of the Bermondsey microbrewery.

O’Riordain isn’t necessarily concerned with reputation, his primary worry is how the product tastes when it reaches the lips of the consumer.

This approach may seem baffling to companies constantly seeking demand and looking for the next market to expand into, but the aim at Kernel is as simple as the label that adorns the bottle.

“We want people to drink better beer than they are,” says O’Riordain.

The problem with mass produced beer is that the taste becomes indifferent in order to sell to a wider market, claims the Irish-born brewer.

He also highlights the difference in quality when a beer has to travel across continents, believing most beer needs to be drunk “young and fresh” to realise its full potential.

As for coping with the demand, the Kernel man says the level of interest is beyond their capacity.

“We’ve been very lucky I suppose, though I like to think it’s more than luck sometimes, as our beers have always been well received.

“The demand for them is way higher than anything we can produce, it’s far beyond our capacity.”

O’Riordain believes the consumer experience should be enjoyable right through the supply chain. He looks to work with purchasers who appreciate the product.

“A lot of what I do is actually trying to control the demand, to make sure we pick the right people to work with, the right bars where I would want to go drink and that hopefully charge the right prices.”

Artisan food also tends to be a local affair, and The Kernel applies that to beer, which also ties into the small batch mentality.

Around 90% of what Kernel sell is in London and the decision to keep matters close to home is a conscious one.

The founder believes having a larger number of smaller breweries is better than having a couple of big ones. An abundance of local suppliers offers variety

The reality matches O’Riordain’s ideal with around 50 breweries in London and over 1,000 across the country.

Similar to local organic produce, consumers are catching up with local beers and the value of community support, alongside quality of produce.

“You see quite directly the interest people start to take in where their food comes from. The growth of farmer’s markets, people being able to buy really good quality food that’s often local, that they can buy directly from the person who grows it,” says O’Riordain.

I wanted a theme for 2016 that riffed off the idea of a Software and Crafts movement. Earlier this year Dave Letorey was talking about brewing beer for this year’s event, so Homebrew stuck.

That is, I had the theme early.

We’re in the age of the side project, in our industry because of open source dominance, so why not look at passion and sustainability and making beautiful things, not because its a job but because its a way of life.

There is nothing more purpose driven than homebrew, or baking, or knitting, or becoming a wine distributor. You do it because you love it, not because it’s convenient. There is something incredibly powerful about that.

Just as with software the brewing industry is being completely disrupted by the growth of microbreweries, many of which began as homebrew. Thus Evin O’Riordain, founder of The Kernel Brewery, one of our speakers this year, when he outgrew it gave his first set of equipment to the talented Mr Andy Smith at Partizan Brewing.

If you’re a regular Monki Gras Alumni you’ll likely remember Partizan for its excellent Fes Stout, which we gave away 2 years ago, with a lovely personalised label in the company’s house style, made by Alec Doherty. 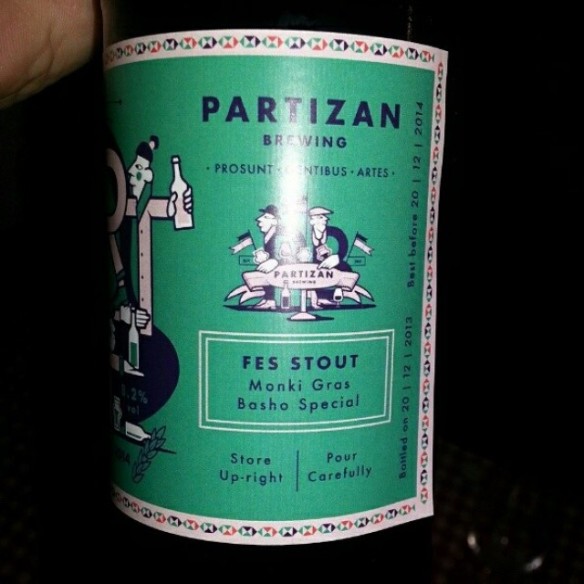 I want to explore the side gig, the talented amateur, the people that make things because they have too. Oh and if you are a brewer it’s time to get your mash tun in now. We’re going to open the tasting up this year to people that love to brew. Please let me know if you make something else you’d like to introduce my lovely community too.